I think this photo of my great-grandmother, Elizabeth Collie, is beautiful. She has lovely eyes and there’s just a hint of a smile. Thank you to cousin Wendy for preserving this photo and doing the research on Lizzie.

Little is known of Lizzie’s brief life. Lizzie was born in King and Queen County, Virginia on February 22, 1873; one of eight children born to Mary Jane Carlton and James Collie. She’s found in the 1880 census living on a small farm with her parents and siblings in Petsworth in Gloucester County, Virginia. Lizzie may have moved to Richmond around 1892 with her brother James. Her death certificate reported that she had lived in Richmond for ten years. James Collie sent this letter to his nephew, Raymond, in 1939. I found the letter tucked behind a drawer in an old desk that had belonged to my grandmother. James was a minister and lived in New York City by 1900. 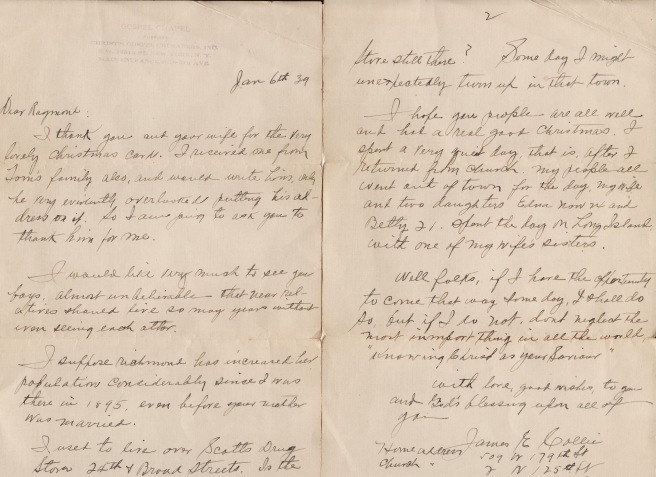 Lizzie married Thomas Leonard Sykes on July 8, 1896 in Richmond, Virginia. My grandfather, Raymond, was born just a year later in Richmond, on August 6, 1897. Thomas was born in Richmond on August 9. 1899. He was always known as Brother Tommy.

The Sykes family lived at 319 North 29th Street on Richmond’s Church Hill. They may have moved here shortly after the house was built in 1900. The house still stands and you can tour it on Zillow.

Lizzie didn’t get to see her children grow into fine young men. She died at home of tuberculosis on April 30, 1902, at the age of 29. Lizzie’s brother Earnest died in 1898 and her sister Eunice died in 1899. Although I have not seen their death certificates, it is likely they died of the same disease. Tuberculosis is highly contagious and it is possible Lizzie contracted the disease from her siblings.  Her obituary refers to a “long and painful illness” and Lizzie may never have had the strength to care for her boys.

The University of Virginia digital tuberculosis exhibit explains, “Formerly called “consumption,” tuberculosis is characterized externally by fatigue, night sweats, and a general “wasting away” of the victim. Typically but not exclusively a disease of the lungs, TB is also marked by a persistent coughing-up of thick white phlegm, sometimes blood.” There was no cure and Lizzie would have suffered greatly.

Raymond and Thomas were raised by their paternal aunt, Evy Sykes, and her husband, Robert Davis. The boys’ father, Thomas, traveled for work and moved to Pennsylvania.

Lizzie is buried at Oakwood Cemetery and shares a headstone with her husband and his mother.