The lives of our ancestors are often seen as distant and not relevant to our contemporary lives. They are merely names and dates, words on a piece of paper or computer screen. Chancery causes, such as those preserved digitally at the Library of Virginia, can reveal much about long-ago family members: desires, passions, habits, even their health.

Cumberland County taverns were probably buzzing with rumors about the Hendricks and Womacks in 1779. The Hendricks were well known tavern kee 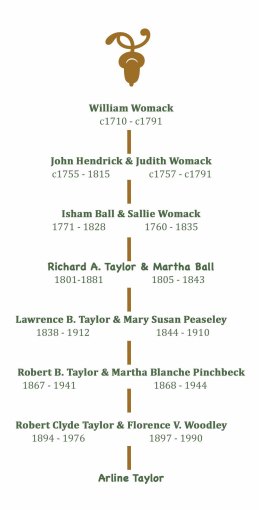 pers and William Womack was a prosperous Cumberland County farmer. The families were joined on November 20, 1777, when John Hendrick married Judi

th Womack. John was at least 22 years-old, and Judith was about 20 and the youngest daughter of William Womack. The young couple lived with William for a little over a y

ear after their marriage. Their departure resulted in litigation, making their private troubles public gossip.

John and Judith Hendrick filed a chancery cause against William Womack in 1779. The Revolutionary War was being fought across Virginia but John and Judith were litigating broken promises. They alleged that William had promised them, on the condition of marriage, three slaves, Sampson, Fam and Dinah or Rachel. He also promised that upon his death they would receive his land on the south side of Da

venport Road, and more than half of his estate. Their written statement says they married on the basis of this promise and John’s “tender and affectionate love” for Judith, and “lived together in the greatest harmony and most peaceful happiness.” Since their marriage, the couple had asked William “in a dutiful and friendly manner” to comply with his promises. So far, William had only delivered Dinah, and John and Judith were not satisfied.

Friends and neighbors were called to court to testify. Joseph Starkey was deposed on June 26, 1780, but the deposition is too faded to read. The testimony of John Davis, taken in 1780, is also hard to read, but describes an evening in 1777 he spent in the company of John Hendrick and William Womack. The men were drinking, perhaps coffee, laughing and talking.

John Langhorne recalled an evening with William in 1776, “I expect it will not be long before my daughter Judith be married… I have no Objection to John Hendrick. I suppose when I die I may give her near half that I have.”

Richard Allen described an evening in the company of Bernard Gains and William Womack. This was a few days before John and Judith’s wedding. “The said William further declared that he would make them, the said John & Judith, worth eight hundred pounds on the day of their marriage” by giving them three negroes. He also intended to give the young couple his land on the south side of Davenport Road. “The said John was to live with him and take care of him during his Life, this deponent further said the said William appeared to be in liquor & appeared much pleasured with his daughters intended marriage.” Bernard Gains confirmed much of this statement in his testimony.

Finally, John Howell relayed that John Hendrick told him about the gifts promised by William Womack and indicated that he and Judith would be living with William. However, John also said that he did not understand that the Hendricks were bound to live with Womack in consideration of the gifts.

When this suit was brought against him, William Womack was an old man of about seventy years, considered quite elderly in those times. He readily agreed that he had consented to Judith and John’s marriage, but denied there was a marriage contract or that he had promised them slaves or land before his death. “This Respondt. readily admits that he had made his Will & bequeath’d the Negroes aforsaid to his Daughter Judith on his death previous to her marriage, but as a condition to be perform’d on her part, She was to Continue to live with This Respond’t during his life, and to discharge those duties which a Parent hath aright to demand of a Child, and which this Respond’t call’d forcibly for, being not only subjected to the infirmitys incident to old age, in general, but also laboring under the inexpressible misfortune of the loss of his sight.”

William further explains this was made clear to John prior to the marriage. “Your Respondent further answering that although his said Daughter had repeatedly promised him to live with him, & take proper care of him during life,… yet, the said Judith regardless of her said promises, which the common dictates of Humanity should have prompted a strict compliance with, has in violation of filial duty, departed from this Respondents House, in about a year or little more after marriage, altho he the said Respondt gave her no sufficient cause, and left him in the most disconsolate, & Solitary situation.”

As the youngest daughter of the widowed, infirm and blind William Womack, Judith was expected to care for him the rest of his life. In return, she expected slaves, property and more. John Hendrick said the gifts were promised upon marriage. William Womack viewed the gifts as a conditional inheritance.

When the depositions were done, John Hendrick notified the Court that he had reached a private settlement with William Womack without disclosing the agreement details. When William Womack died eleven years later in 1791, he only left to daughter Judith, one slave, Dinah, who was already in her possession. The remainder of his substantial estate was divided between his other six children. It appears the litigation and broken promises created a lasting rift between father and daughter.

William Womack is a DAR patriot for his support of the troops with supplies.

John Hendrick is a DAR patriot for his service as a soldier.

Descendants of these men are eligible for DAR membership.

Quotes and facts in this article are from 1781-001 Cumberland Chancery Causes, John Hendrick and Wife vs William Womack, Library of Virginia.